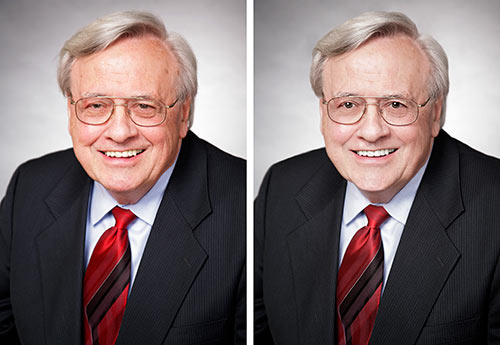 Listening to people talk about doing great headshots, I sometimes hear them say that they want to “keep it real.

Going too far can be a problem. I’ve been guilty of it many times. My long experience in fashion and beauty doesn’t help one use restraint in retouching. That’s why I never mind when a client asks me to back off somewhat and undo or tone down some of the retouching I did. Sometimes they’re right, and sometimes it’s a valid point of view, even though I would like to go further.

But we shouldn’t let the principle of keeping it real be an excuse for sloppiness in either shooting or retouching. Not if we want to produce great headshots that really project a strong personal and company brand.

Maybe your shirt and tie looked fine when you left the house, but you’ve had a hard day. Now five hours later, your shirt is wrinkled, the tie is loose, and your jacket has specks on it. Why shouldn’t we fix those distractions that diminish your professional image? Is that not keeping it real?

The headshot photographer needs to know where to draw the line, and it’s not always clear where that is. Some of it is just a matter of taste. But there are other things we can all agree on. Lumpy shoulder pads and jackets that don’t close anymore should be fixed, yet these common problems are neglected by most photographers.

Maybe that’s because most photographers have an arts background and aren’t sensitive to issues like professional image and branding. Lucky for me, I had a background in doing public relations for corporations and professional firms, which gives me an advantage in these areas.

Almost every day I see a link-bait article on the “worst Photoshop fails.” OK, so some photographers and retouchers make mistakes. Sometimes the results are gruesome or laughable. But is that any reason to turn your back on careful shooting and editing? I hope not.

Most clients are extremely pleased with the polished results. But once in a while, clients are afraid I made them look “too good”.  I’ve heard these words several times and I usually tone down the image to make it more natural and less polished.  I know that some of these feelings from the clients come from standards for headshots that are too low, caused by photographers who don’t care enough about producing great headshots and the ubiquity of selfies and other amateur shots.  I also suspect that some people are afraid of being criticized by their co-workers if they go too far. I just hope there’s not some Gresham’s Law at work whereby the bad images drive out the good ones.

It is wise for executives and professionals to be careful not to let their images look fake or glamourized. Yes, they should look real. But it would be foolish to hold back too much and avoid the upscale look that will contribute to the branding of the person and the organization.

Need a business or professional headshot but don’t want to go out?

I’ll come to you and do the headshot in your home or office. No extra charge during this difficult period. Same fee as for my studio. 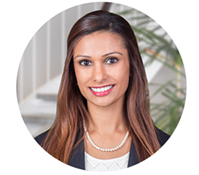